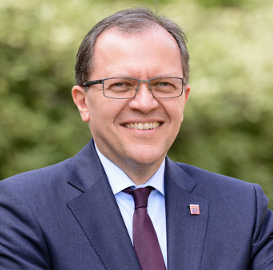 Thomas Metz was born in Bensheim on 4 September 1968. He graduated with a degree in law from the University of Mannheim and completed his training with the second state examination at the district court of Darmstadt in 1996. He took up a function in the regional council of Darmstadt and served as a judge in the administrative jurisdiction of Hessen as from 2002. Thomas Metz worked in the Hessian state office in Wiesbaden from 2002 to 2005 and then further pursued his career as a judge at the social welfare courts, ultimately with the Higher Social Welfare Court in Darmstadt. He was deputy head of the County authority “Kreis Bergstraße” from 2007 to 2014 and is State Secretary in the Hessian Ministry of Justice since January 2014.